Welcome to The Merchant’s House and Store 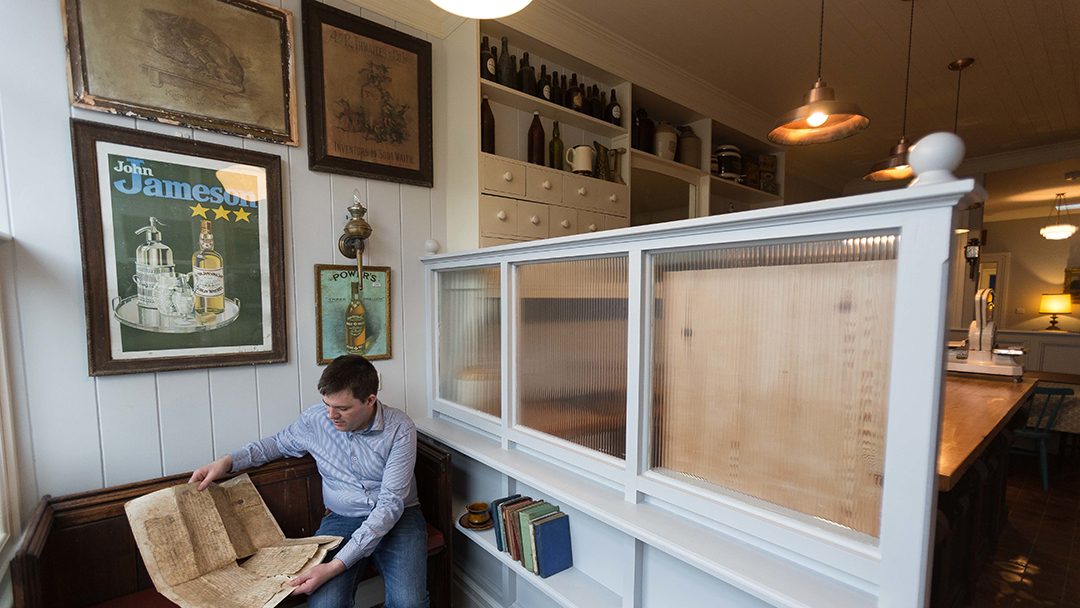 During the 19th century the Irish towns and villages that we see today started to emerge. Streets of simple terrace buildings were formed with a business or trade street side on the ground floor with living accommodation to the rear and on the upper floors. The years following the dark days of the Great Hunger of the 1840s saw a new Irish, mainly Catholic, Shopkeeping Class emerge.

By the end of the 19th century, many of this new class, now confident in their place in society and having the means to do so, remodeled their business premises and homes in the latest trends and fashions. The late Victorian Shopfronts had an aura of grandeur to them; with the arrival of plate glass glazing bars could be removed from the window. Quoins and other decorative surrounds were added to the windows. Inside, the shop was refitted out with beautiful wooden shop fittings. Local craftsman were employed to carry out all these changes. In addition hired help, servant girls and boys, were now needed to tend to the shop and home. All these improvements created employment and modern shops with the latest goods and fashions which must have been awe inspiring in their heyday.

New found wealth and respectability in society brought with it aspirations of Education and Professional training for the children of this new class. Outside of their businesses, many of this new class were highly involved in many civic offices; volunteering their time and wealth for the good of society. At this time the newly formed Urban District Councils were being formed through Ireland which signaled the beginning of the end for many of the Landlord class as decisions about how towns were run moved from the local Landlord to the town’s council which was largely made up of the new Merchant class. By the second decade of the 20th century Ireland was an Independent Nation charting its own course through History for the first time in many centuries bringing with it many changes at every level of society.

The Merchant’s House is unique in its own special way; over the last two hundred years it has witnessed a time of truly great social change. Its history reflects that of Ireland’s over the last two centuries; its occupants’ journey through life a fascinating snapshot of what it actually was like to live through those interesting times when the Irish majority went from being repressed, religiously, economically and educationally, to being the arbitrators of their destiny.

Over the next few posts I will introduce you to some of our residents; their interesting visitors and the history of Kilrush.

Come on in …………. pull up a seat in our lovely restored snug or drawing room and watch the world go by as you reminisce on times past and to come ……………  you just never know who you might meet here at the Merchant House and Store!!